Small Town Monsters has announced the September 20th DVD and VOD release of Seth Breedlove’s docudrama MOMO: The Missouri Monster.  The latest title to crawl forth from the production powerhouse behind last year’s best-selling documentary On the Trail of Bigfoot, MOMO: The Missouri Monster seeks to tell the true, and truly strange story of the Missouri Monster. The hair-covered, three-toed monstrosity was said to have prowled the forests of Star Hill, near Louisiana, Missouri during the summer of 1972 where it was spotted by terrified citizens for weeks.  The film will be available nationwide on DVD, as well as Vimeo OnDemand, Amazon Instant Video, and VIDI Space. 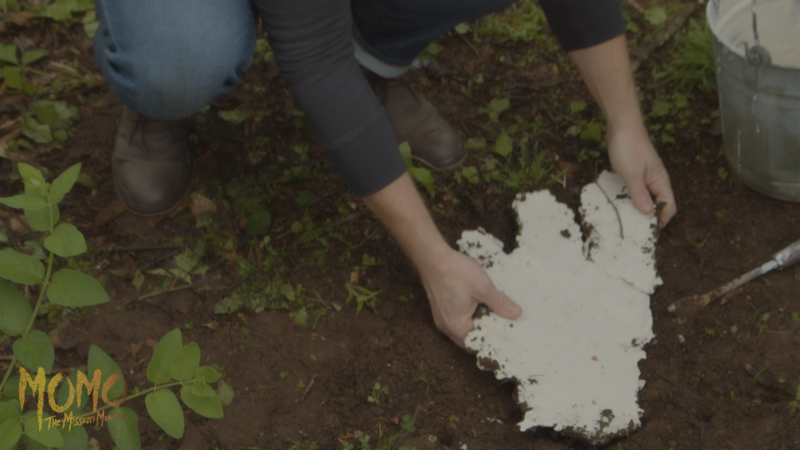 The case gained national media attention during the ’70s and remains one of the largest tourist draws for the tiny town on the banks of the Mississippi River. The latest release from Small Town Monsters and director Seth Breedlove, MOMO: The Missouri Monster is told in both narrative and documentary form. The narrative sections appear as a lost b-movie from the 1970s, inspired by Breedlove’s lifelong fascination with grindhouse movies and creature features. The horror film depicts the widely accepted details of the MOMO legend and is eventually contradicted and corrected by the actual survivors who lived through the events.  Breedlove describes MOMO: The Missouri Monster as “Rashomon meets Creature from Black Lake or The Legend of Boggy Creek“.

The film stars Adam Duggan and Sara Heddleston, as well as Animal Planet’s Cliff Barackman and James “Bobo” Fay with special appearances by Janet Jay and Elizabeth Saint (Ghosts of Shepherdstown).
Ahead of the national video release, a midnight premiere is scheduled at the Kentucky Theater in Lexington, Kentucky on Friday, September 6th with cast and crew in attendance. The premiere will coincide with Cryptid-Con, a cryptozoology and paranormal convention celebrating its third year and featuring a number of renowned authors, television personalities, and speakers.  On Friday, September 13th, the Canton Palace Theatre in Canton, OH will play host to the Ohio Premiere of MOMO with cast and crew in attendance. Finally, on September 20th, as MOMO hits audiences nationwide, the Missouri Monster will storm the State Theater in Point Pleasant, WV as part of the kickoff for the annual Mothman Festival.

The year was 1972 and the place was a tiny, quaint, riverfront town called Louisiana, Missouri. On a warm summer evening, two local kids saw a creature in their own backyard holding a dead dog. Before you could say the word “Bigfoot”, local media and police officials had pounced on the story. Overnight Louisiana became “monster central” with creature seekers and monster hunters combing the woods to look for “the thing” that the newspapers had dubbed “MOMO”. One particular family was at the center of this whirlwind of activity and as the Missouri Monster sightings began to increase, so did the negative impact on the Harrisons.
In 1975, a film crew set out to tell an over-the-top, filmic version of the MOMO sightings. Due to one reason or another, this should-have-been-cult-classic was never released. Until now.

Directed and Written By Elle Callahan and starring Gideon Adlon, Abigail Cowen, Christian Camargo, and Elizabeth Mitchell, Witch Hunt is set in a modern America where magic is real and witches are persecuted Read more

After the discovery of a mysterious VHS tape, a brutish police swat team launch a high intensity raid on a remote warehouse, only to discover a sinister cult compound whose Read more

The Secret of Sinchanee trailer released

The Secret of Sinchanee trailer released

Christopher Alender's spellbinding horror hit THE OLD WAYS, described as "the greatest exorcism movie since The Exorcist" (Film Threat), comes to Digital, DVD and Blu-ray this October! Special features on the Read more

This October, there’s a Mutated Rat loose in the city! After a deadly experiment on a rat goes wrong, the mutated rat has been let loose in a city and Read more

In celebration of her 40th anniversary, Elvira will lend her unique blend of witty commentary to a four-movie horror marathon that includes Elvira: Mistress of the Dark, House on Haunted Read more

Directed by William Eubank, Paranormal Activity: Next of Kin stars Emily Bader, Roland Buck III, Dan Lippert, and Henry Ayres-Brown. It is the seventh installment and a reboot of the Read more

OUIJA JAPAN is a female-led action/horror film combining two popular horror elements: the Ouija and the Japanese Battle Royal. Discover the Japanese Ouija, how it differs, what it does, how Read more

Directed by Guillermo del Toro, Nightmare Alley is an upcoming American psychological thriller film with a screenplay by del Toro and Kim Morgan, based on the 1946 novel of the same name by William Read more

Directed by Adam Randall, Night Teeth follows Benny, a man whose entire world is turned upside down after picking up two mysterious girls who expose him to a secret world Read more

A new teaser trailer has been released for the upcoming horror anthology ‘Mosiac’. The latest feature film from TIS Films directors Alex Churchyard and Michael Holiday who are best known for the award winning ‘I Scream Read more

MOMO: The Missouri Monster to be unleashed on September 20th 2019

Small Town Monsters has announced the September 20th DVD and VOD release of Seth Breedlove's docudrama MOMO: The Missouri Monster.  The latest title to crawl forth from the production powerhouse behind last Read more

MOMO The Missouri Monster is another documentary from the always excellent Small Town Monsters crew. Unlike their other works, this film blends the use of actual documentary footage with snippets Read more

Locke and Key Season 2 arrives on Netflix on October 22, 2021. Locke & Key follows three siblings who, after the murder of their father, move to their ancestral home Read more

After suffering a traumatic incident, Molly (Cecilia Milocco) moves into a new apartment to begin her path to recovery, but it’s not long after her arrival that a series of Read more

AMC Networks’ premium streaming bundle AMC+ and RLJE Films, a business unit of AMC Networks, announced today the acquisition of and a day-and-date release for the darkly comedic drama Silent Night ahead of Read more

I Know What You Did Last Summer TV series teaser released

Cult Faction Podcast Ep. 27: Reboots Are Made For Walking!